No. 77084 Rocky Canyon
Richmond "Rocky" Canyon is an African American mountain climbing specialist and is the youngest member of the Rescue Heroes.

When Billy had once thought about quitting the Rescue Heroes, it was ultimately Rocky, through an audition video, that convinced him to stay, cementing Billy's decision to hire Rocky. In the episode "Twister" it was revealed that his hometown is in Oklahoma, and that his father had passed away.

Grant Granite is his professor.

The color of Rocky's gloves continually change. His original toy model has purple gloves, other models have him yellow, and still yet the TV series depicts him with white gloves. 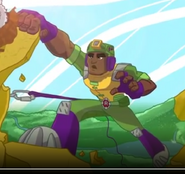 Rocky in the Reboot 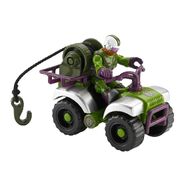 Add a photo to this gallery
Retrieved from "https://rescueheroes.fandom.com/wiki/Rocky_Canyon?oldid=5809"
Community content is available under CC-BY-SA unless otherwise noted.